While not properly OSR today me and some players for my group decided to try Delta Green. I grabbed a module, the free rules and we jumped into it. Here's the recap.

As most CoC and DG modules are this one had a heavy emphasis on investigation as well. The group, comprised of Walter Park and Sven Handeberg, two ex FBI agents, had to investigate the murder of an underage prostitute in New Orleans. The adventure is structured like a point crawl and the group has the liberty of going wherever they want. Keep in mind that the module wasn't initially a DG adventure, rather a Chaosium's CoC one so I had to adapt some minor things and probably it doesn't completely fit the feel of the setting.

Walter and Sven started investigating in the park during the day, the body was already disposed of and they didn't find much information except for the fact that the party is a junkie's paradise at night, so they decided to come back later in the day. Still with their FBI clothes they went ahead and proceeded to interrogate the prostitutes and, as you might've expected, they weren't eager to talk with policemen. But money talks, so they met Honeysuckle Rose and learned about Kathy (the victim) and her boyfriend, Spider. They also learned the location of her house, so thats where they headed next.

Her home was an abbandoned Squat, once a drug-house, now almost completely empty. Inside was Matthew Piper, an addict. They went inside with a shotgun, pointed it at him, scared him a bit, tried to gather some information and got almost nothing and at they end they called an ambulance. After rescuing Matt they kept exploring the rooms and found Kathy's. Inside: a pornographic book with a name and an adress "Hammond's Adult Books". Walter was quick enough to make the connection between the surnames so the store became their next goal. 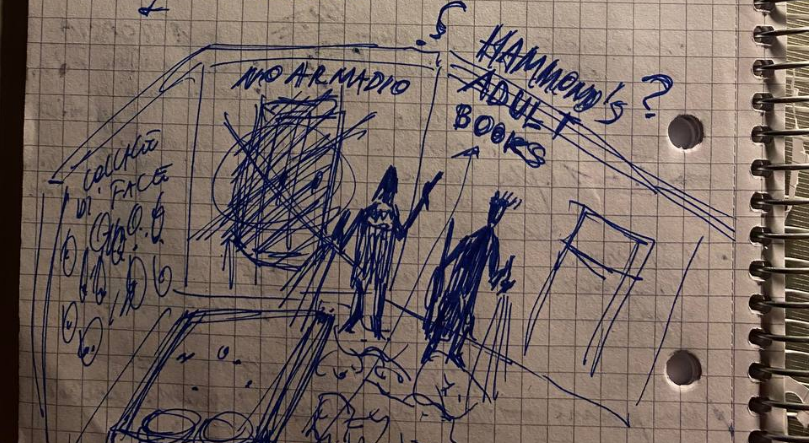 They went to sleep and drove to the adress on the book. They immediately saw the car outside, the one that was seen on the scene of the murder, so they immediately became suspicious. Colin Hammond was a quiet man, he answered all of the investigator's question and was collaborative. The group left with a bitter taste in their mouths and went towards a disk shop: their goal was to find more information about Spider and, after finding the the album of his group they decided to stop the session for the night.

Next time they'll finish everything and we'll see if the resolution will be satisfactory. Stay tuned.