“There was a bad old woman who lived in the corn.

Only children knew that she was real.

She had seven souls and couldn’t die the same way twice.

So all the children poisoned her.

and burnt her and drowned her.

And then they threw her in the well.

Thats Six And Seven Makes All..” 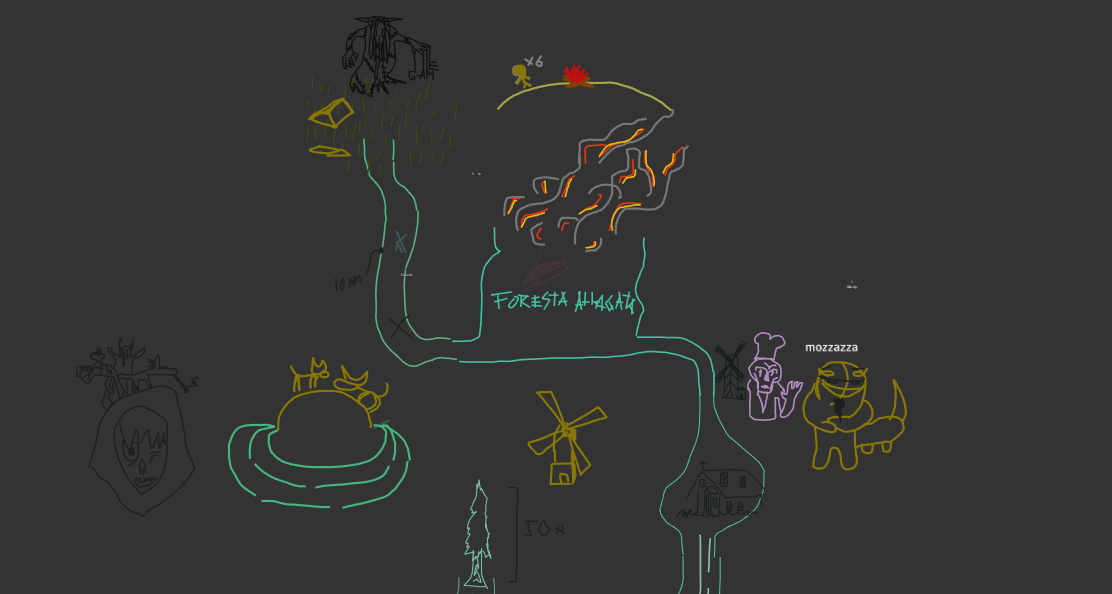 During the night Thelonius, Cavell, Glirk and Basyli got woke up by a group of zombies. They were people from Carrowmoore, dead, undead. Thelonius found a new purpose in life: protecting Basyli, it's a sign from Krom, everything else is secondary. They ate something and set off west. Their trip was shortly interrupted by a column of smoke in the distance, they decided to invstigate and found the Lifesaving Library, a fun little encounter where they spent 3 hours building a raft to ferry the family to Pollagollum in exchange for their scrolls.

The group ignored the Cypress and the Animal Hill, but they decided to interact with the Log Tableux (sic?). Three figures were paralyzed on the log and when Basyli tried to jump on the thing to help them he also almost got stuck there forever. More on this encounter in the DM notes beneath.

Finally the group reached Pollagollum, they saw the fields, the stalks. As the boat passed by they saw the people sitting on their roofs, watching beneath, into the murky. Then, finally, they saw her. This has been oneof the most atmospheric and powerful encounters in the book so far, not as gameplay but as presentation. It was cool, creepy and my players seemed to enjoy the meta aspect of it.

Glirk tried to fight, the others ran in fear. The Witch destroyed the boat and grappled Glirk, Cavell jumped down to help and together they climbed back to the roof. Then they forgot. Luckily they had saved some kids from the Library, so they all with a bit of reasoning understood that there was something fishy going on there. They're still not sure it's actually the witch but they're preparing to fight it just in case.

Next time, the final showdown.

This session was better. More opportunities for the players and not so streamlined. We're still halfway trough the road to the dungeon but the second part feels way faster. Not that we're not enjoying this but I think the observatory is what everyone is waiting for (I'll have to think of a way to run the giant). I'm still having trouble using the Crows: they feel like an awesome touch but I find it so hard to integrate them naturally in the game. Same goes for the race. I had the cannibals surpass them but what now? I don't want the Crows to straight up murder the players, plus they're in the river so the opportunities are limited. It feels like using a boat allows the players to skip most of the content, not sure if it's intended. The Log Tableux encounter was really weak. What point does it serve? The players will never figure out how to save the paralyzed people, it's not explained how the toxins work, the worm isn't even hostile, idk, it felt really off to me. Dam's upcoming, I hope they won't all just die on me lol.