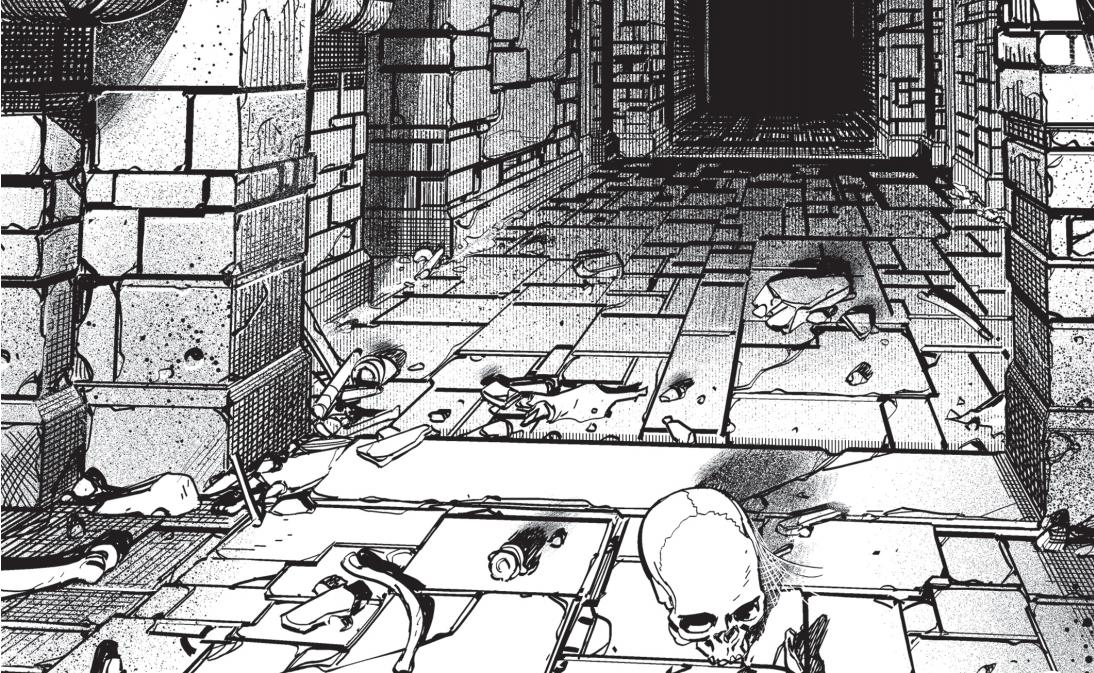 A short session but an intense one! Cavill and Gaspard faced the dangers of the barrowmaze once again, this time with little luck. Cavill fell into a pit trap with Fossil Skeletons right at the beginning of the session (Area 49), luckily their dwarf henchman Cordoon grappled one of the skeletons with a rope from above allowing the elf to escape. They retreated and after a brief rest in Helix decided to go for the lower area of the starting zone. The dungeon restocked during that time and they fought a Barrow Guardian right at the entrance, afterwards they managed to reach their destination. There they investigated some crypts, battled some enemies and found some loot (a runic tablet they didn't use yet!). They were a bit disappointed that this wasn't the zone described in the map of Area 68, but as a positive note they managed to solve the mistery of the Solis statue in 78A.

While they were there they cautiously approached the room 77 and with the help of a ten-feet-pole triggered the trap, but broke the pole (Poor Cordoon, it was his!). Finally, they made the fatal decision of going east and trying to open 78D5. Gaspàrd is a thief but, as mentioned before, not very expert in OSR so this was his first encounter with a "Save or Die" trap. The door to the area is locked with a trapped lock and, sadly, the thief went straight to lockpicking without first checking for deadly devices.

It was only a matter of seconds: the trap acivated, the dice rolled, the save failed and the character dead on the floor. Rest in peace Gaspàrd. Cavill then used the Amulet of Raise Dead on him so he didn't have to carry him to Helix and returned safely to town.

The next character will be Thelonious, a cleric. Let's see if Turn Undead is gonna be put to use!

Next are some DM considerations and spoilers that I'm gonna put under a spoiler tag since my players read my blog.

First of all I still have to decide if I want saving rolls for traps or not. The first one got triggered and luckily it turned out to be a monster one, but it could've been a bottomles one! I'm not sure I like "gotcha" traps like that that don't even allow saves.

Secondly I tweaked some of the restock numbers. I'm ok with the dungeon being alive and persistent, but if following the book RAW a lot of beginning zones become a "hack and slash" excercise of patience with little to no progress. For example I was supposed to have 4 restocked rooms instead of only one when they fought the guardian. That woul've meant half an hour with no progress.

They still haven't met the Mongrelmen properly and they're always like one door away from some meaningful roleplay but I hope they'll meet them soon. I never actually introduced them to proper faction play.

And lastly a general consideration about the players. I found it really amusing to see how Cavell went inside the opened room even after Gaspàrd died, and wanted to even open the sarcophagus contained inside. That would've meant risking the entire adventure just for getting some loot sooner. This is a curious phenomenon in my opinion and one that really taps into the whole Risk vs Reward concept of dungeons. Let's be real, once you're high enough level and have enough coinage to justify sleeping in taverns for years there's really no reason to push your luck for "just one more door", yet people still do it. Fascinating!